Baseball's Crap Sandwich of a Week

There are really two posts here, but I'll talk about them as one subject. Baseball has had a really, really crappy week.

The end of Ken Griffey Jr.'s career in baseball is the biggest news, and the way that Griffey went out is sad and pathetic. He should have been evaluated in spring training and asked to retire before the season got off to a start. If they knew then that he wasn't hitting, why subject him to an April and a May of misery?

This is an example of terrible managing. Griffey may have wanted to work through these issues, but a real manager would have evaluated his potential as a contributor and gone from there. Baseball is the least sentimental of sports. If you can't play, you get off the roster. No team can afford to carry dead weight. Griffey is a first round lock on the Hall of Fame. Anything less is a travesty. He is a poster child for playing the game the right way.

This is the least surprising story, however: 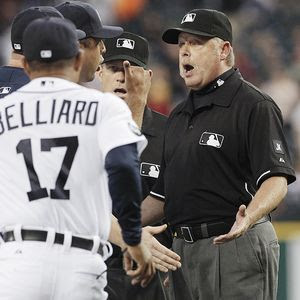 A baseball official familiar with the decision confirmed to The Associated Press that the call was not being reversed. The person spoke on condition of anonymity because that element was not included in Selig's statement.

Joyce said he erred on what would've been the final out in Detroit, where theTigers beat Cleveland 3-0. The umpire personally apologized to Galarraga and hugged him after the game, then took the field at Comerica Park on Thursday in tears.

"It was the biggest call of my career, and I kicked the [stuff] out of it," a distraught Joyce said Wednesday night. "I just cost that kid a perfect game."

Detroit general manager Dave Dombrowski had said the team wouldn't ask MLB to overturn the call. The mistake denied Galarraga the 21st perfect game in history, and the first for the Tigers.

Bud Selig isn't about to lead or do what is in the best interests of baseball. Bud Selig will never make the fans happy and he will never do anything that will make people want to watch baseball. The continued success of the sport is in spite of, and certainly not because of, his tenure as the corporate enabler of Baseball Inc. If baseball's anti-trust exemption ended tomorrow, I would be ecstatic. If the government of the United States were to step in and appoint a commissioner of baseball who answers to no one, fine and dandy.
What he will do is this: he will prevent a young pitcher from gaining immortality in order to downplay the fact that the steroid era, which is now over, really was a travesty against baseball. Rather than throw out the tainted statistics and records attained by dozens, if not hundreds of players, Selig is going to prevent the attention from being focused on the fact that pitching has improved because hitters are no longer juiced. Selig is going to prevent a young man from getting his perfect game so that the team he plays for does not have to pay him more money.
Until and unless the steroid era is effectively dealt with--which begins with throwing out everything Barry Bonds has done since the late 1990s and restoring the home run records to Roger Maris and Hank Aaron--forget it. Cheating is cheating, but perfection is perfection.
Armando Gallaraga is better than the sport he plays.