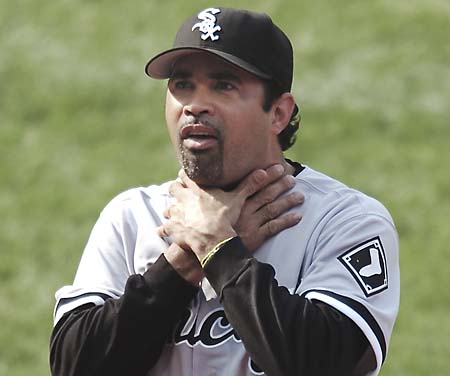 I don't know if there even should be a controversy here. If a Major League Baseball manager takes to Twitter and tweets something, that's the same as telling the entire world the same thing through a media person or through a public statement.

Ozzie Guillen is looking at some sort of fine.

Major League Baseball is looking into any rules White Sox manager Ozzie Guillen might have violated by using Twitter to make derogatory comments about an umpire after being ejected.

Should Guillen be fined it would be the first time baseball has penalized a player, coach or manager for their use of the social networking site during a game.

Guillen was tossed Wednesday night for arguing balls and strikes with plate umpire Todd Tichenor in the first inning of Chicago's game against the New York Yankees. He then went on Twitter to say the ejection was pathetic and it would cost him a pricey fine. He also said that a "tough guy" showed up at Yankee Stadium.

Social media is, by definition, not really private. Now, if Guillen had a Twitter account with a handful of followers, and if he was restricting his Tweets to only that group, he could make a case for limited privacy. Even still, if you put it out there, it's hard to make a case for privacy.

Is Twitter any different than an E-mail? Boy, that makes my head hurt. I don't know.

Baseball has a social media policy covering employees that applies to managers and coaches and prevents them from disparaging umpires.

There also are guidelines that basically prohibit players, managers and coaches from communicating by electronic equipment from 30 minutes before a game until it ends.

But baseball has not had to deal with the rise of Twitter and other social networking sites in the same manner as the NFL and NBA, which have strict rules of conduct for expressing opinions in this rapid-fire format.

Common sense would dictate that Guillen shouldn't have been Tweeting his displeasure. Someone should have knocked the keyboard out of his hands and gone through all the same motions as if they were restraining him from going after someone on the field.