The Greatest Hitter of His Generation? 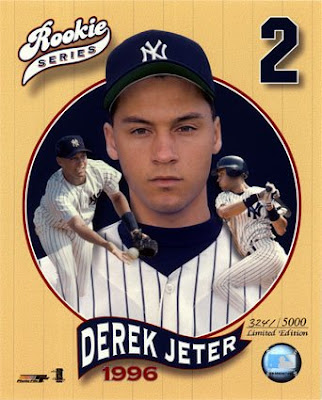 Derek Jeter might be the best--and the cleanest--hitter of the modern era:

New York Yankees shortstop Derek Jeter is 25 hits away from the 3,000-hit club.

Jeter lined a bases-loaded single off of New York Mets hurler Mike Pelfrey in the bottom of the seventh to tie Sunday's Subway Series matchup at 3-3. The ground ball up the middle snuck underJose Reyes' glove and scored Brett Gardner andChris Dickerson.

The two-run single snapped Jeter's 0-for-21 skid with the bases loaded and sparked an eight-run seventh for the Yankees, who eventually won 9-3.

It gave Jeter two hits on Sunday, for the second day in a row and fourth time in five games.

For all of the talk about whether he still has it, this milestone is a big deal. The fact that Jeter has gotten there without using performance-enhancing drugs puts him way ahead of his peers (and let's hope it remains a fact).
at May 22, 2011