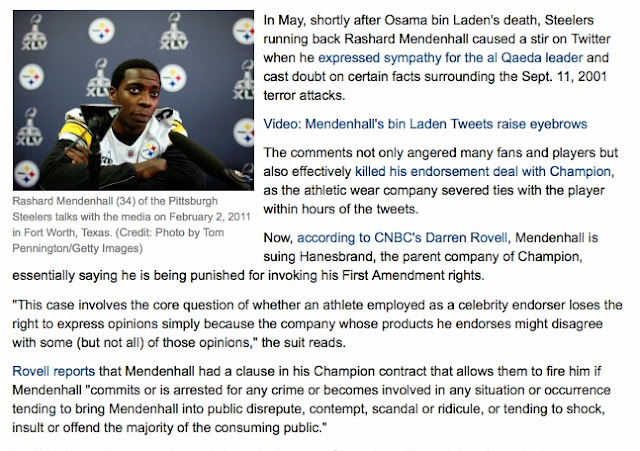 Plenty of people have lost their jobs or their positions for expressing some form of doubt about the veracity of what happened on 9/11. If Van Jones can get fired (he resigned, of course) for that sort of thing--and if hapless Gilbert Gottfried can get canned for Tweeting something stupid--then Rashard Mendenhall's suit has no merit. He is free to speak out, of course. But he is bound by his agreement with Champion not to do so in a way that would bring down the sort of firestorm of controversy that erupted when he made his ill-advised tweets.

It doesn't matter if Champion failed to take action when Mendenhall was making a jackass out of himself on Twitter in the weeks and months before he waded into the Osama bin Laden issue. It's about whether or not Champion can dump him if he violates the terms of his endorsement deal.

Mendenhall's tweets caused him public disrepute and held him up to ridicule. Champion was well within its rights to fire him. For me, it's case closed.
at July 19, 2011