Joe Mauer is Done for the Season 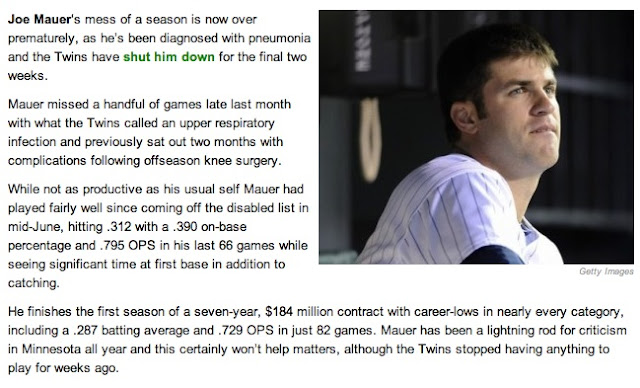 It has been one of the worst seasons in the history of Minnesota Twins. They have been as bad this year as they were in the mid-1980s, and I would count the 1986 season as their worst (recall that they were a worst-to-first winner of the 1987 World Series).

I thought that Joe Mauer would have been traded to the Yankees by now. I did not know about his gargantuan contract. I think that was a mistake. The Twins, if you will recall, hung on to Kirby Puckett a little too long and could have gotten a lot for him if they had gotten rid of him prior to his vision troubles.

Baseball does not make me a sentimentalist. If you can play, play. If you can't, see ya. If you're too expensive, so long and thanks for the memories. To be sentimental about baseball is to worship at the altar of mediocrity. If a player can't help your team win right now, get rid of him and get someone who can.

This is Ron Gardenhire's last season, by the way. That's my predicition. I'm probably wrong, but oh well.
at September 17, 2011