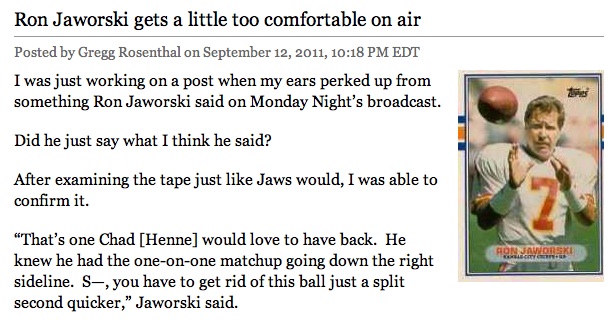 It doesn't really matter whether or not they suspend or fire or humiliate Jaworski for saying 'shit' on the air. At least there weren't boobies involved.

Analysts tend to nitpick over things that professional football players do. If Henne had held onto the ball long enough to get sacked, fine. If he had gone to throw the ball, then tucked it away, missing an opportunity to advance the ball, fine. But a split second, even in a fast game like football, looks like a thirty second drill up in the booth and I blame this on the mistaken belief that slow-motion is a fair way to assess what players do. It's not.

Did Henne have poor timing throughout the game? Okay, then. But one pass, one "split second" mistake is what coaches work to try to eliminate. Jaworski needs to remember that Henne, and players like him, can't sit in the booth and obsess over slow-motion replays in order to look knowledgeable. The speed of the game that they play is radically different from the one that looks like a graceful ballet in the booth. At full speed, did Henne's hesitation really look that bad? My guess is that it probably wasn't.
at September 13, 2011