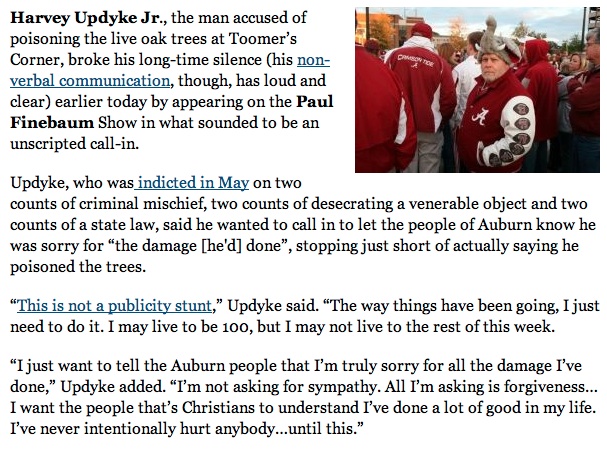 Harvey Updyke Jr. is accused of poisoning the live oak trees of Toomer's Corner at Auburn University. He emphasizes the good that he has done with his life and insists that he has never hurt anybody up until the point where he, as a supposedly mature adult, decided it would be the ultimate college football prank to poison some trees out of a sense of unsportsmanlike spite and team rivalry (apparently, he's a big Alabama Crimson Tide fan who likes to give the finger when he's not pleading for forgiveness). Only, his bleatings and pleadings sound a little hollow and flat to me. After all, this was about college football. And it wasn't a "somebody." These were trees.

It is a truly ridiculous thing when someone appeals solely to those who self-identify themselves as Christians (every other denomination or belief structure can go pound sand) for forgiveness, that they do so well after the fact and only when they face legal jeopardy.

Harvey Updyke is a pathetic man child. He did something brazenly stupid and hateful and he did it because he doesn't care about anything that really matters. What would possess a grown man--not a kid, not a child, not some dumb college boy drunk on hubris--to do something as stupid as poison some trees is beyond me. But yet, there is that whole thing about college football, and how it gets completely out of hand and how some people just can't handle the rivalry thing.

For him to now plead for forgiveness smacks of being told what to do by a lawyer. When he came out of court, the only thing on his mind was the pain and embarrassment of being revealed to be the loser and the nothing that he truly is. He lashed out with a finger. He should have had the maturity and decency to realize his mistake. Instead, what we see, is a perfect example of how one person can ruin it for the rest of us.
at September 29, 2011