The Fighting Sioux Give Up 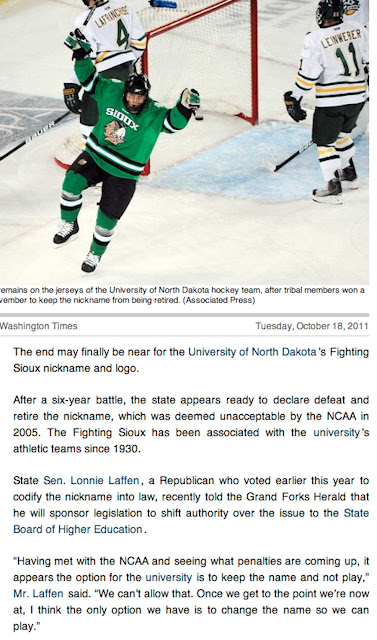 Much has been said about whether this makes sense. Well, let's remember that it was (almost, but not quite) perfectly fine for schools to pick Indian names for their mascots. They used to be very commonplace. This reflected the culture, and many of the names were chosen in the late 19th and early 20th Centuries when the subjugation of the Native American population was a part of the immediate history and culture of the Western United States. In that period of American history, yes, you could reasonably expect to pick a name that reflected a regional Native American affiliation and have it accepted as the nickname and identity of the team. This was done regularly and extensively, and we are now dealing with that legacy. We are dealing with it because people are a little more enlightened and sensitive now.

The reason why UND should change the name is very simple. You couldn't choose such a name in this modern age, and that's a good reason to get rid of something that is offensive. But, look on the bright side. A vintage Fighting Sioux hockey jersey is now worth more than what it was before UND decided to buckle under to the pressure to make the name change. So be it.

This is about money, and the university couldn't buy the name from the local Sioux tribes and win their endorsement. Now they have to change their name and logo and hope that their fans will gobble up the new merchandise. Maybe a winning season will help ease that pain.