Yes, the Redskins Really Did Fight Over Strippers 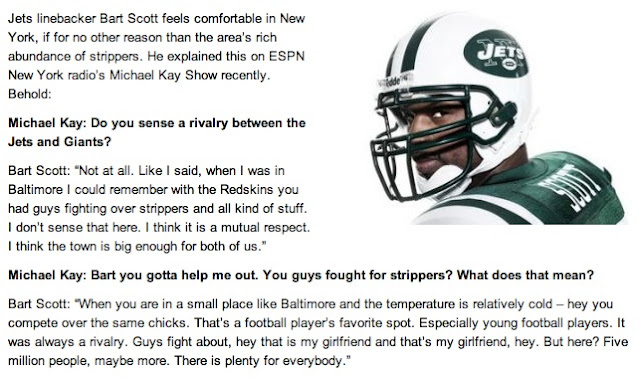 A lot of people are going to make fun of poor Bart Scott for revealing that the Washington Redskins are a "stopover" franchise. I don't know how to phrase this any better, so I'll explain what I mean by stopover.

Essentially, a player goes to Washington in order to receive a outsized payday and understands that the hopelessly dysfunctional franchise is a place where an NFL player can mark time until the next contract or until a better offer to play for a real football franchise can be procured by an agent. No one plays hard in Washington unless they are trying to get injured on purpose and avoid having to play for a losing team. For help, see the career of Albert Haynesworth.

Are there enough strippers to go around in the Baltimore-Washington D.C. area? I have no idea. But if NFL players are fighting over strippers, I think it means that there aren't many strippers who rise to the level a multi-millionaire is accustomed to when he wants to show the world how classy and respectable he can be.