Barry Bonds Got Away With It 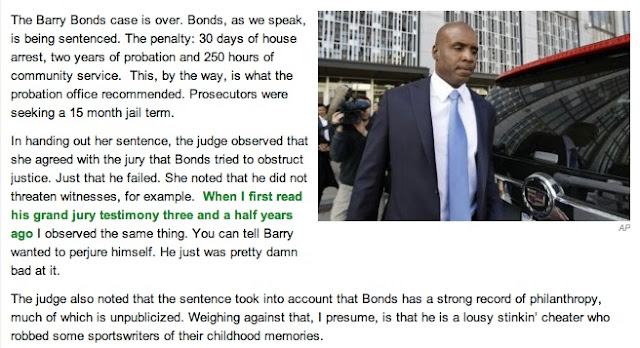 I don't really have any hope for baseball anymore; the cheaters cheated and the sport "cleaned itself up" and we are now faced with the cold, hard reality that many of the statistics put up during the Steroid Era are going to be in the record book forever.

There was no way Barry Bonds was going to get "caught" in the sense of seeing his freedom, his wealth, and his records taken away from him. He simply had enough wealth to hire legal representation that could throw enough chaff into the fan and wear the system down. He had enough stamina to go through the motions and pretend that there was something to defend here. He had enough cash to get away with it, basically. But the fraud lingers. The fraud of what he did is there, and it is the elephant sitting in the room, casually swinging a baseball bat around, dashing the hopes of purists everywhere. Well, screw the purists. Baseball isn't for you anymore, suckers. Go follow chess.

Major League Baseball functions without a real Commissioner of Baseball, and it will probably never have one again. Whoever puts on that hat will be told what to say and how to say it. I wish that I could live long enough to see a real commissioner walk into the room where they keep the sacred book of holy statistics, tear out Barry Bonds' records and numbers, and set them on fire with a lopsided grin. Justice will never be done.
at December 16, 2011