The NHL Has Been Realigned 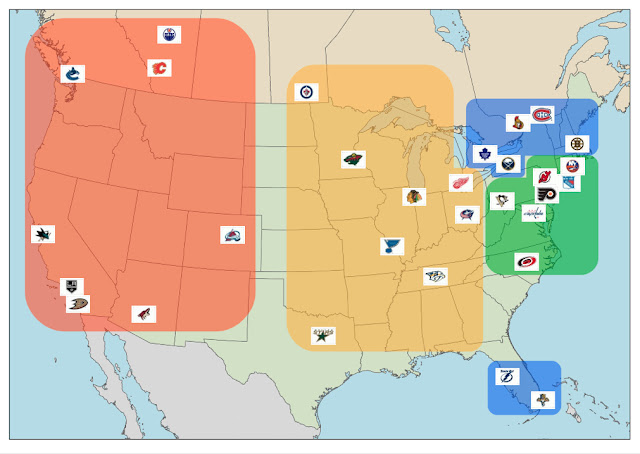 The National Hockey League has voted to realign itself into four conferences. These conferences have not been named yet, but going back to the original names that were used before the last realignment and awarding special cups, bowls, trophies, or doodads to the four conference winners would be a welcome change to what we have now. Oh, and put the games on ESPN as often as possible. I'm not aware of how often nationally televised games happen right now, but isn't it time for the NHL and ESPN to start putting as many games as possible on? That would help considerably.

Now that we no longer have hockey in Atlanta, and now that Winnipeg is back, you can see the regional curiosities that pop up. Teams in Florida now play in a conference that is split in two; the concentration of professional hockey in the Mid-Atlantic doesn't make any realignment any easier. I don't think anyone would have suggested splitting the Rangers and the Flyers up into separate conferences, and adding Pittsburgh to that group makes it interesting. Boston has a conference consisting of Buffalo and the three Eastern Canadian hockey franchises--making the two Florida clubs that play with them travel, but that's fine. That's no worse than having Phoenix play Edmonton I suppose.

There's nothing to scream about here. Rivalries were a factor in this, as was the whole issue with time zones. All in all, what's not to like?
at December 05, 2011