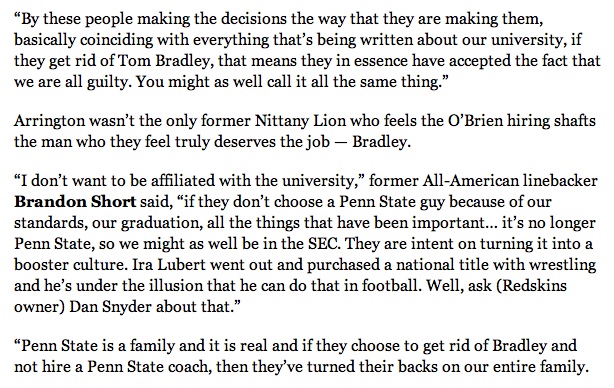 This article is, ostensibly, about LaVar Arrington's ego and little else. Penn State University has gone out and found a football coach that does not bring baggage with him to the job; they have decided not to retain a "Penn State guy" by getting rid of interim head coach Tom Bradley.

Penn State has to flush the system and they have to get rid of the entire coaching staff. They have to tear up the athletic department and start over. They have to contend with a decade or more of lawsuits, legal bills, and the NCAA's sanctions if those are forthcoming. They have to deal with the future and try to forget the past in any way possible. The past is irretrievably tainted by the specter of a coach raping children in the locker room.

But that doesn't mean anything to men like Arrington, who are hell-bent on making sure that what they want for their old school matters. Arrington, who is out of the spotlight and has nothing--nothing--but his tenure at Penn State to hold on to, is flinging that in the air in order to get people to pay attention to him again. And that's sad.

Penn State's problems run deeper than offending LaVar Arrington. Perhaps someone should tell him the truth--the future lies along a path that leaves the past behind. There is no future for Penn State football with a guy who carries any of that baggage.
at January 06, 2012