The Moral Cowardice of Joe Paterno 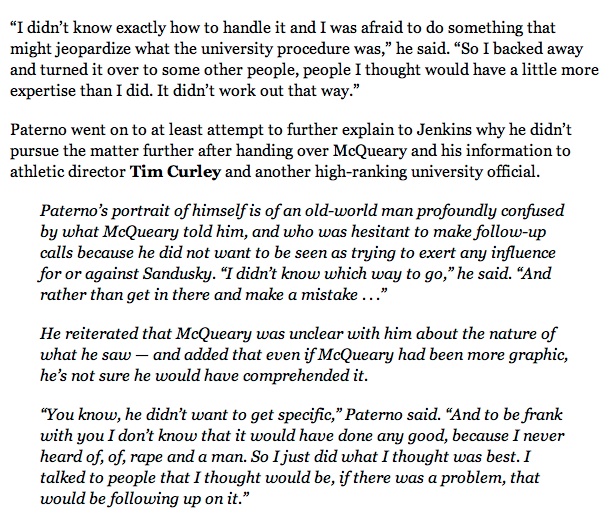 I don't blame Joe Paterno for trying to salvage what is left of his legacy. I'm sure that he means well. But sitting down with Sally Jenkins didn't work out the way that he wanted it to.

Specifically, we now know that, in his heart of hearts, he was a moral coward when presented with evidence that his assistant, Jerry Sandusky, was engaged in the sexual abuse of a minor. What "mistake" could he have made by taking steps to ensure that Sandusky was either cleared of the charges or arrested? Who would have turned on him and accused him of anything unethical by taking steps to get to the bottom of such a thing? Who could have faulted him for raising holy hell and calling attention to what was going on?

Joe Paterno, in his entire life, never heard of a man raping a child? And he can't even spell it out properly. He can't bring himself to repeat what he knew to be true.

Later in the article, we're treated to the old saw of if this had been our child, we would have killed Sandusky. Please. Talk about your post-incident bloviating. Why is your child more sacred and wonderful than someone else's child?

What a complete and utter disgrace. This incident threatened his program, his wins record, his legacy as a coach. He knew that the moment that it happened. Here was an incident that stood in the way of him and being the greatest coach ever. Instead of saying, aw, hell and doing what he knew he should have done, he threw up his hands, pulled that old "I'm an old-fashioned, unsophisticated guy" charade that he has used in countless interviews, and ran out the back door.

He passed the buck and now he's been called on it. Legacy tainted, and forever.
at January 14, 2012