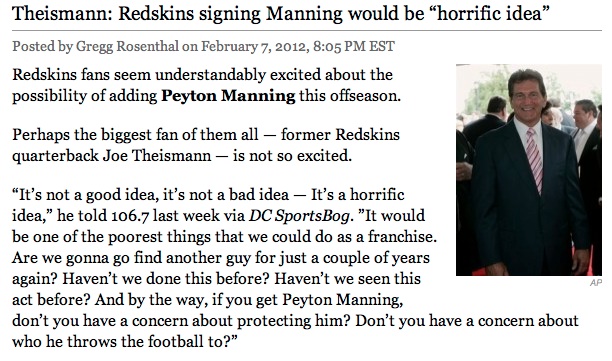 Here, you can see the delusions of Joe Theismann writ large.

If the Washington Redskins were to sign Peyton Manning, several things would happen. Most notably, the fans would continue to forget Theismann in droves as they are doing every single day. Manning would become the greatest quarterback to ever play in Washington the instant the jersey hits his back. Theismann cannot handle this possibility. He can still claim to be their greatest quarterback right now and you'd only get a few arguments in a good sports bar.

But if Peyton lands in Washington, forget it. The fans will embrace him as the greatest to ever take a snap in a Redskins uniform. If he's healthy, he plays another five years or more and wins another Super Bowl. If he signs with them, he parachutes in and becomes the face of the franchise.

Theismann can't handle the possibility, and so, his freakout on the airwaves.
at February 14, 2012