Don't Show Everyone That Peyton Manning is a Classy Guy 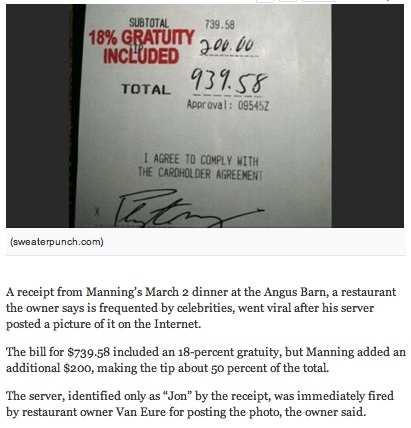 The owner is not acting to protect the celebrity, per se. The owner is acting to ensure that no one will see how cheap many celebrities actually are.

In this Deadspin era of using each and every piece of dirt on an athlete as a blog post that will drive traffic, here you have a misguided attempt to tell people that Peyton Manning is a classy guy. But it does come fraught with peril to do so.

One, it violates Manning's privacy. Yes, he still has one.

Two, it exposes the restaurant to charges of not being able to protect the privacy of the patrons who come there, be they somebodys or nobodys.

Three, it puts Manning in a bind. What if he doesn't want to tip everyone $200? What if this idea takes hold that every interaction with him will require Manning to cough up $200 for every hangdog server, waiter, bartender, valet and busboy? That's a tough thing because, sometimes, you want to reward good service. Sometimes, you don't.