If you want proof that the NFL has a problem with what happens to its players AFTER they stop playing the game, look no further than the latest NFL superstar to whine about being broke and having too many baby mamas to support, Terrell Owens.

It would seem that TO has "squandered" most of his money and cannot pay his bills anymore. This is the Warren Sapp story all over again; and, sadly, it's the story of numerous NFL players who cannot cope with their obligations and their dwindling resources.

The NFL should pretty much admit that it destroys lives; it leaves players crippled, it leaves them addicted to painkillers, and it leaves them in desperate financial situations. It pays these players inflated salaries, dumps them when they are injured, and hopes they will die young so that it doesn't have to pay them pensions.

I am beginning to think we have a serious problem with football in this country, and I don't know what the solution is, other than to put some sort of end to the sport or radically redesign it and restructure it. I would hasten to add that if TO had been paid $800,000 during his career instead of $80 million, he'd have MORE to show for it, not less. 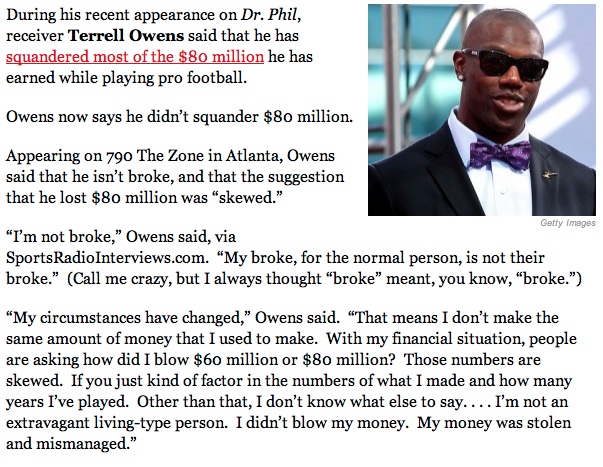 Terrell Owens is incapable of admitting he screwed up and cannot pay his bills anymore. He cannot meet his obligations, but it is "not his fault." It is the fault of whoever stole and mismanaged his money.

The courts will not be amused or swayed by this revelation, nor should they be.
at May 08, 2012