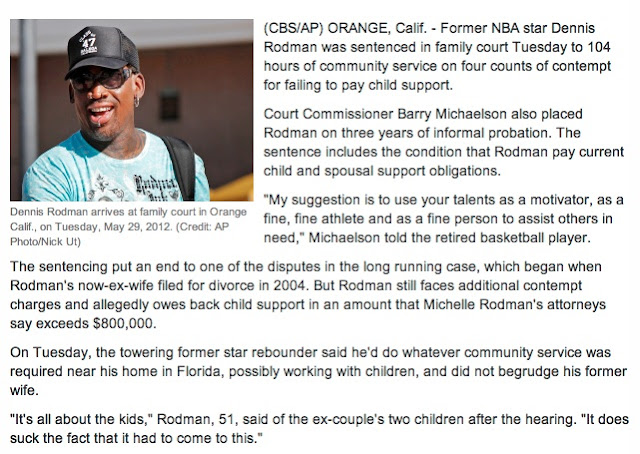 Instead, he has partied away millions and his health and now he is on the verge of having nothing. This does not excuse the fact that the women who are claiming child support are pursuing amounts well in excess of what is needed to raise a child. Their lifestyle choices mirror Rodman's. You cannot sustain the same lifestyle forever because professional sports careers do not last forever.

What is destroying former players like Rodman is not so much mismanagement but a delusional kind of thinking. At age 35, Rodman was making millions; at age 51, he is not making millions. It would stand to reason that reality has to take hold. A man making next to nothing is not going to be able to pay tens of thousands of dollars in child support.

If Rodman had set aside a few million dollars in a kind of protected trust, and then arranged for it to kick in and pay a reasonable stipend for his children each month, that fund would probably last for twenty years or more. It would eventually become depleted, but it would have created security and stability for his kids. Instead, he cashed out his NBA retirement for pennies on the dollar and left himself with nothing to give his kids.

It should be mandatory for professional athletes to create funds to pay out a kind of secondary pension in this manner. A portion of their income should be diverted into a kind of protected trust that can pay out a living wage or a child support payment or even money for a rainy day. Why it isn't is something I'll never understand.
at May 30, 2012