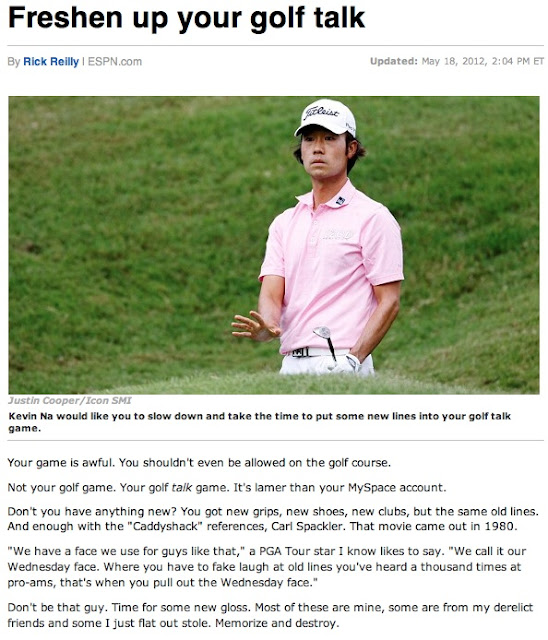 There are some who are speculating that Rick Reilly will not get another big payday at ESPN and that he will fade into obscurity, writing for whoever will pay him to show up and annoy people who play professional sports. My hunch is that MSNBC is the perfect place for him to land. Their sports coverage is ridiculous, their opinions are middle-of-the-road, and you can't get any worse than Jelisa Castrodale.

Reilly's column for the 18th of May is abysmally unfunny and full of lines like:

Situation: You suspect your opponent of cheating.
Old: The pencil is the best wood in your bag.New: Nice round, Mr. Trump.

Situation: Your buddy hits a drive that starts down the middle but then hooks into the trees.
Old: You can talk to a slice but a hook won't listen!New: That's a Kathleen Turner. It was pretty for a while.

Situation: Your line to the green is blocked by trees.
Old: Wish I had a saw in the bag.New: Where's an Alabama fan when you need one?

Situation: Guy takes three to get out of the bunker.
Old: Nice job, Saddam.New: That's OK. They'll fill that bunker up with sand again tomorrow.