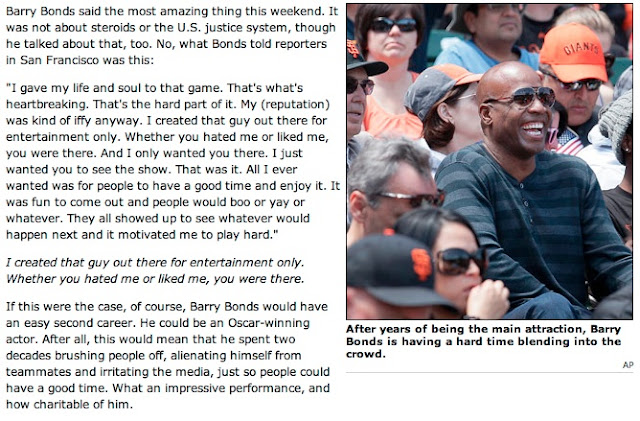 There is going to be an effort mounted out there in the sports writing world to rehabilitate the reputation of Barry Bonds, and I'm not having any of it.

Bonds should be stripped of his records and banished from baseball. Outside of San Francisco, this is an idea that probably has some support. I don't know. I do know one thing--there is a home run king in baseball, and it is still Hank Aaron.

Michael Rosenberg has this to say at the end of his piece:

But we will (hopefully) have Bonds around for the next few decades, in and out of All-Star Game salutes and ceremonial first pitches and whatever else he gets to do. He didn't create the steroid era and wasn't its worst offender. After all, he was on a Hall of Fame track before the time he apparently dabbled in the stuff.

If that doesn't read like one of the most pathetically transparent and dishonest things ever written about Bonds, I don't know what does. Bonds is a toxic presence in baseball. How are you going to justify having him appear at these ceremonies in the future when he should have been banned from baseball? How are you going to say he wasn't the "worst offender" when he used performance enhancing drugs to attain the most coveted record in baseball?

We're not talking about a clown like Jose Canseco or Rafael Palmiero. We're talking about Barry Bonds. Of the three main figures tainted by the steroids scandal, Bonds is the most prominent. The other two, Roger Clemens and Mark McGwire, labor in legal limbo or obscurity right now.

This is where Bonds should be. And we're talking about the Hall of Fame?