The NBA is Full of Head Cases 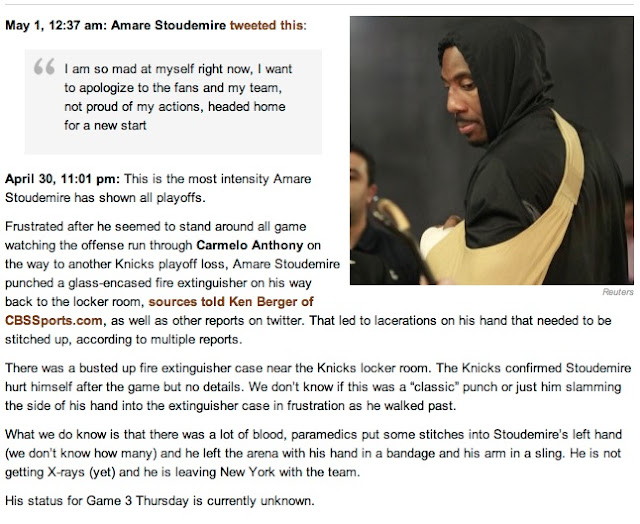 Now that we are into what might loosely be described as the first of several months of playoffs in the NBA, I think it is worth noting that the sport seems to be full of head cases. What with the antics and decision making skills of the likes of Mr. Rajon Rondo, Mr. Dwight Howard, and Mr. Ron Artest (he will never be Metta World Peace here) and a whole host of other crazy or selfish players out there, what are we to think of the NBA?

It's full of jackasses, isn't it? Or is it just that I remember when you didn't win unless you pulled together and played your ass off (and if you had Michael Jordan and Scottie Pippen on your roster).

Well, it is entirely the creation of David Stern and it is a player's league. There's a reason why baseball and football are nothing like the NBA, and that reason can be found where Stoudemire's fist hit the fire extinguisher. If you damage your team's chances in the playoffs as a baseball or football player, you're done. You're gone. You're over with, and fast. If you do this in the NBA, you receive medical attention and soothing, noncommittal comments from the coach who will probably be fired because he couldn't connect with your crazy ass.
at May 01, 2012