Roger Clemens Got Away With It Again 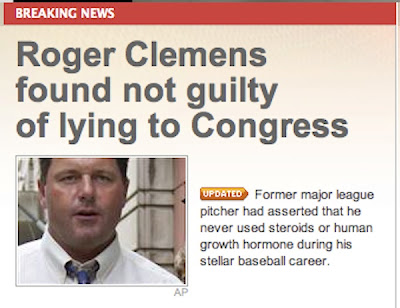 I guess a congratulations is due to Roger Clemens for, somehow, being found not guilty.

This is not the same as being found innocent, and it is certainly not the same as being found not a douchebag. But, here's the thing--in America, when a jury says your are not guilty, then you're not guilty. I always thought that this case would hinge on the fact that the only person who had a worse character defect than Clemens was his accuser, Brian McNamee. But, the kicker was supposed to be Andy Pettite. If they failed to believe Petitte, then there really was no case. It would have been better to avoid a trial and let the stench of it all hang over Clemens, which is what hangs over Mark McGwire right now.

Roger Clemens is still a liar, a cheater, and a douchebag. Ask Mindy McCready. And he has no business going into the Hall of Fame, either. His money bought him a not guilty verdict. And, for that, I suppose we should be questioning the justice system, but we will not.
at June 18, 2012