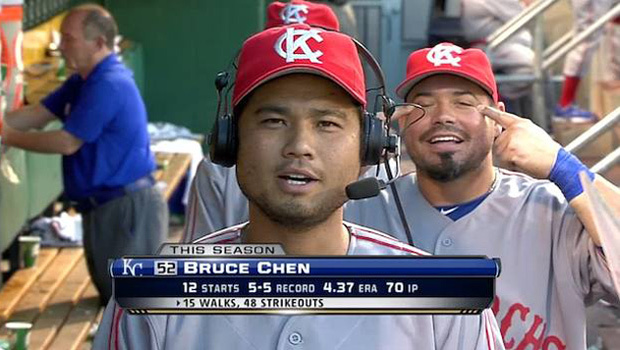 Bruce Chen is not offended, but fans of baseball should be somewhat offended:

(CBS News) Royals pitcher Bruce Chen was being interviewed during the Kansas City-Pittsburgh game on Saturday when teammate Humberto Quintero decided it would be a good time to sneak up behind Chen and make the gesture in the photo above.

Of course insensitive jokes are common in the clubhouse and Quintero certainly doesn't seem to have any malicious intent. But to see this kind of racially charged gesture on national TV caused a stir - and it wasn't long before Quintero began taking heat for his "friendly racism."

Chen, a native of Panama of Chinese descent, apparently wasn't fazed by Quintero's "joke" and quickly took to Twitter to say he took no offense.

It preserves clubhouse relationships for Chen to say that he was not offended, but the problem is, it is still an offensive thing to do to anyone, much less a ballplayer. If you take off the uniforms, and make this about Bruce Chen being interviewed, then this is still fairly offensive.

A face full of shaving cream? No problem. This? Let's just say this hurts the image of baseball, tarnished and crappy though it may be.