Dave Zirin Simply Doesn't Get It 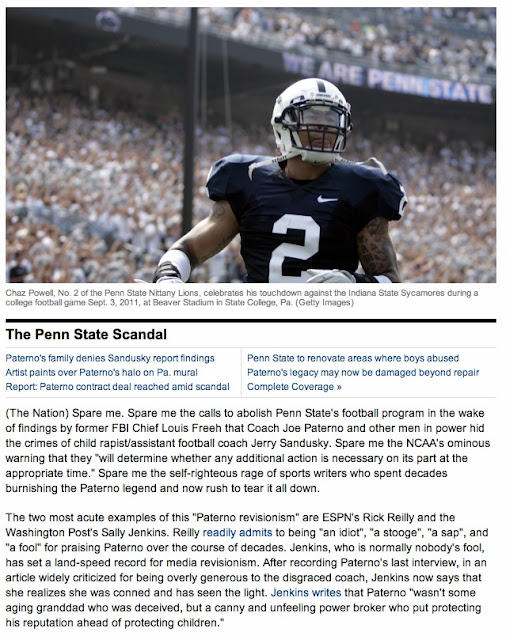 Dave Zirin, who is the sports editor for The Nation, loses his mud here.

It's not like there's anything to gain from defending Penn State at this point. It's not like anyone is going to look to Rick Reilly with anything other than pity and disdain.

The problem here is this: Joe Paterno didn't give a damn about the children that Jerry Sandusky molested. That's now a proven fact. And what makes that the crux of everything that is going on here is that, were it not for Joe Paterno, Jerry Sandusky would have been caught, tried, and convicted of child molestation a decade or more ago--thus saving several young boys from being molested.

What was it that gave Joe Paterno the power to do such a thing?

What was the source of his ability to intimidate officials into doing nothing?

What is the sole reason anyone in America even knows who Joe Paterno is?

The reason why children were raped is because Penn State University did not have effective operational control over the men's football team because Joe Paterno had too much power and was too influential to allow anyone to control his team. His coaches, trainers, players and whoever else were all, effectively, completely in his hands and no one could touch him.

The very fact that the man was untouchable should tell you that there was and is a structural problem at Penn State that cannot be fixed unless and until the football program is, effectively, ended and then rebuilt under a new system of rules and in a way that will place it under institutional control.

Dave Zirin can't admit it--Penn State Football became the most insidious kind of criminal organization--one outside of the control of the people who were corrupt enough themselves to revel in the fact that they were winning football games while children were being raped in the showers. It was something utterly hellish and vile, and we're talking about how "spare me" is an effective rhetorical defense of what, exactly?

Spare me the details--football means what now?

So, you tell me. A man with tremendous power and influence is faced with a choice. He can do the right thing or he can turn a blind eye to what's happening in his own football program in order to continue his march to glory and the record books. And so, he chooses Penn State Football over children who are being molested.

What needs to happen here is this--Penn State Football needs to go away for a while, possibly for good, to set an example as to what can happen when an institution loses functional control of a major asset like the Men's Division I college football team. It needs to go away because the very foundation of Penn State Football is now so encrusted with filth and slime they're actually remodeling the showers where Jerry Sandusky raped children.

And you want to defend these people?