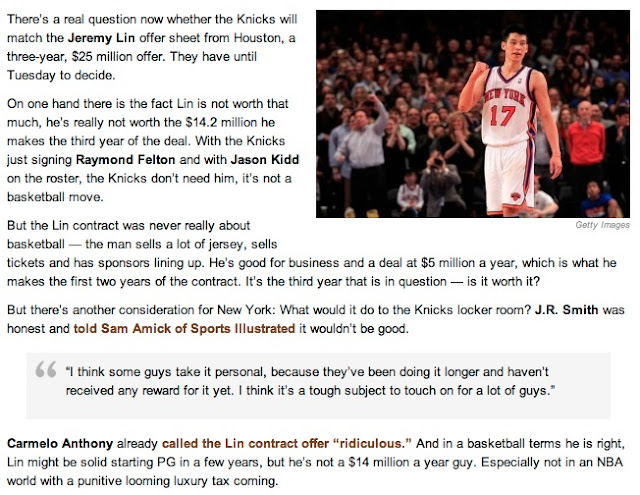 Much of what you read in this article has been overtaken by events. Jason Kidd's personal life has imploded, this time probably in a way that will put him out of the NBA for an entire season, possibly for good, and I would be surprised to see him play at all this year. Do you make an effort to keep Lin or do you go with a 39 year-old head case who has had about as much trouble as possible in the NBA?

What you see above, from the likes of J.R. Smith (no NBA titles, couldn't even lead his team in China to a championship) and Carmelo Anthony (more DUI and marijuana busts than NBA titles), is pure player hating. They hate Lin for being good, for getting a lot of attention, and for making an impact during the first part of last season. They hate Lin because he shows up and works his ass off. This is because, during the first 30 or 40 games in an NBA season, nobody plays hard and nobody tries. Jeremy Lin showed how exciting the game could be simply by showing up and actually playing hard. Smith and Anthony would prefer to play on a team where no one can show them up.

And, really. Do you want crazy and old or do you want a young guy who has Michael Jordan's work ethic? Because, quite frankly, nobody in the NBA really has much of a work ethic anymore, except for Jeremy Lin.
at July 15, 2012