The Big Ten Rallies Behind Penn State (Sort Of) 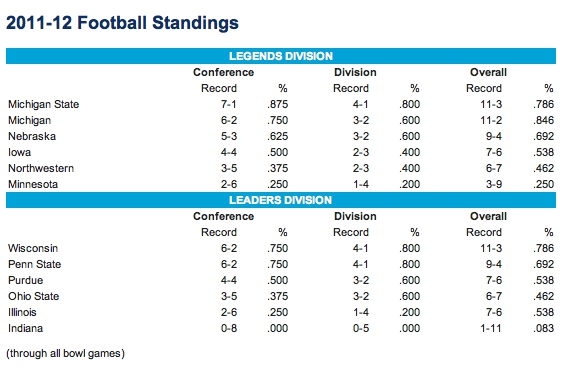 You can't read this without knowing what the chart posted above really means:

CBSSports‘ Bruce Feldman was first to report the free agent frenzy, and as of Wednesday, members of Illinois’ coaching staff were apparently hanging out in State College trying to grab a player or two*.

“We have chosen to stay at Penn State and opposing coaches are outside our apartment, was that the intention of the NCAA?” tweeted Penn State defensive back Adrian Amos.

Embellished or not, there was a chaotic vibe coming out of Happy Valley.
Day 1 of Big Ten media days was more subdued. Partially because Nittany Lions running back Silas Redd wasn’t in attendance — he’s reportedly very close to signing with USC — and partially due to other Big Ten, coaches taking a by and large less-controversial approach when it comes to poaching from their fellow Big Ten member.

Bret Bielema (Wisconsin), Brady Hoke (Michigan), Urban Meyer (Ohio State), Bo Pelini (Nebraska) and Kevin Wilson (Indiana) are among the coaches who said in one form or another that they would not actively pursue Penn State players.

It is wonderful to see these coaches develop some semblance of ethics during this particularly troubling time, but there's no denying the fact that Indiana and Illinois are desperate to get someone--anyone--in there who can play football.

You could easily make the case that throwing Penn State and Indiana out of the Big Ten wouldn't hurt the conference one bit, and I would buy that argument wholeheartedly.