The Destruction of Lance Armstrong 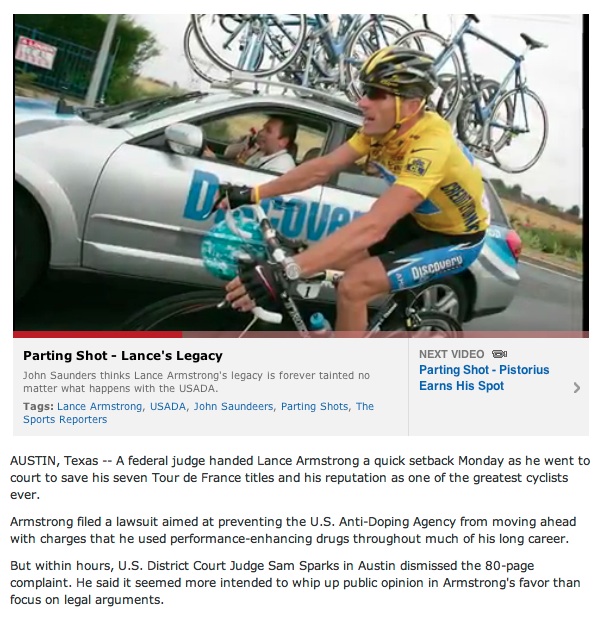 The USADA needs to release what it has so that this material can be scrutinized. If this material does, in fact, destroy Lance Armstrong, then that's what it does. I don't think you can avoid releasing it, but it is fair to say that there's a disconnect here.

The U.S. Department of Justice had the same material, and didn't go after Armstrong. They took a pass on it. That says to me that there are significant chain of custody issues here. And if the material has a chain of custody issue--where the samples were outside of the control of the governing authority and thus could have been tampered with--then that material should be challenged.

If Lance Armstrong is innocent, they'll never believe him. If he's guilty, they'll never give up trying to destroy him. Armstrong should walk away from everything he's built and go have a nice life. No matter how much good he tries to do, it will never be enough. The self-hatred of his enemies is such that they simply cannot allow Armstrong to continue as anything other than a pariah. He's too rich, too famous, too successful for his haters to back away.

As far as I'm concerned, there is no sport of cycling anymore. There are just men who cheated and men who haven't been caught cheating yet. It has no validity, no honor, and no one who legitimately holds any form of title within the sport. It is the playground of cheaters and thieves and whores, and it should be flushed with all of the other pseudo-sports.

Really, would you put your trust in the finale of a competitive cycling event anymore? Would you take that over pro wrestling?
at July 10, 2012