Who Really Speaks For the Paterno Family? 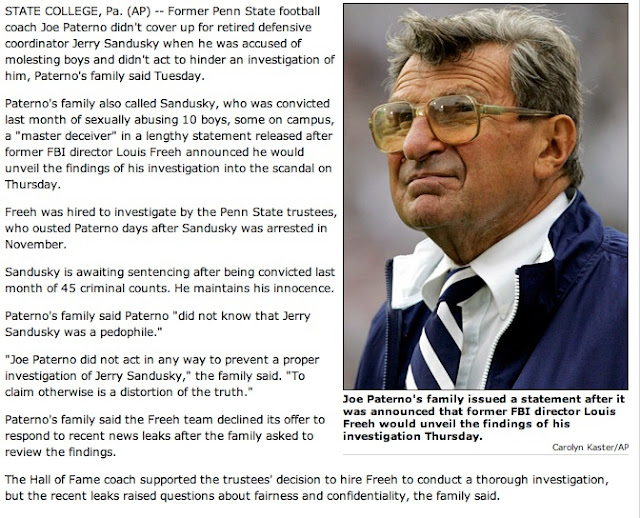 The legacy of Joe Paterno is, effectively, destroyed. Whatever the report says, the man demonstrated that he valued his football program over all else, especially the rape of children.

It's interesting that Sports Illustrated allows itself to be used in this manner. Every quote referenced to "the family" refers back to the "Paterno" family, and to some mythical idea that the name Paterno still has credibility. The mouthpiece of the Paterno family has traditionally been Scott Paterno, and we know he has an agenda and no credibility.

I don't want to hear any of this nonsense about "forgive and forget" and "let bygones be bygones." I don't have much faith in Louis Freeh, either. But I do believe that anyone who thinks that Paterno was a good guy who was wronged by others hasn't been paying attention.

Where the hell is the NCAA in all of this? Why are they not at the forefront of determining what should be done about all of the victories won by Paterno since he decided to cover up the fact that his top assistant coach was raping children on Penn State property?
at July 11, 2012