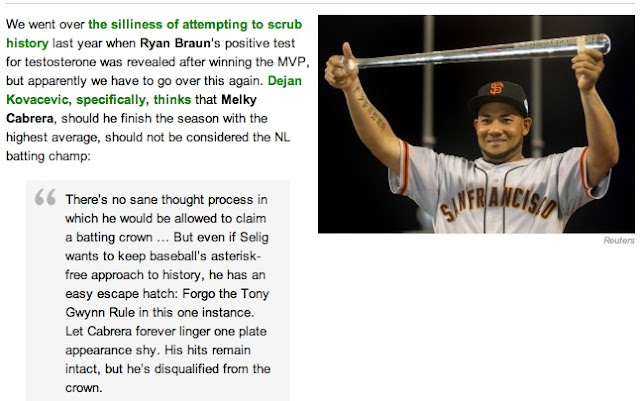 How has it come to this?

You have a player who tests positive for a banned substance. That player is up for a batting title--and we're debating whether or not he should "win it?"

How do you get to win something if you've cheated?

You do that in the current framework of Major League Baseball, where there is simply no accountability for the one thing that matters: statistics.

Everything that exists in baseball is really about statistics. Players who test positive for banned substances have not won anything; they have cheated the game in order to improve their statistics.

If baseball was a properly functioning entity right now, the mere act of cheating in this manner would invalidate statistics. But that would mean throwing out numbers for players who are caught in a grey area--did they cheat before the ban went into place? What if a player is exonerated? And so on and so forth.