The Sad Demise of the Houston Astros Franchise 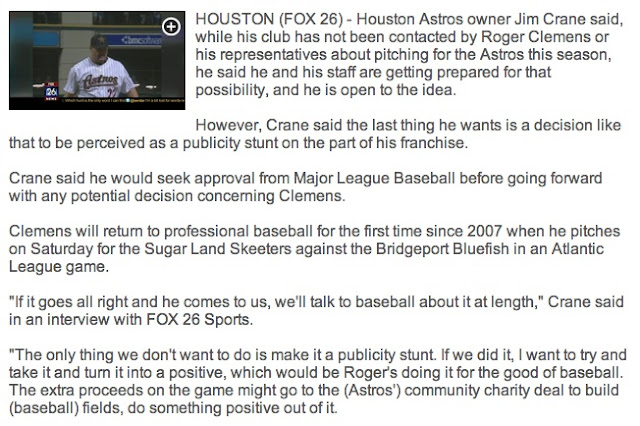 The Houston Astros have jumped the shark on this one. What used to be a relatively proud baseball franchise has sunk to a new low. Only a team mired in suckage would contemplate giving a 50 year-old man who hasn't pitched in five years a place to chuck a few mercy pitches. Baseball is a game where sentimentality goes to the showers and then home to a plate of what-have-you-done-for-me-lately? Baseball isn't about letting some old guy have a few throws for old time's sake.

Roger Clemens should definitely be allowed to pitch again. He won his case, he beat the rap, and he personifies the baseball credo--if you can get away with it, keep doing it. This is how Bud Selig runs the league. How 'bout we do Mindy McCready night and Roger can throw a few pitches while they play her old songs and then they can hand out bobbleheads that say "not a douchebag" on them?