Who Are You Calling a Retard? 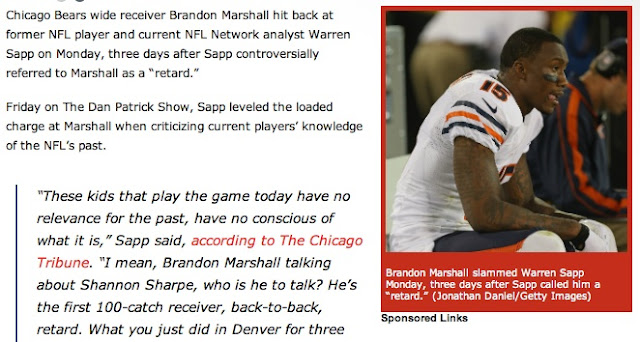 Brandon Marshall's only mistake was this--he should have ignored Warren Sapp.

He should have said and done nothing in response to Sapp's use of the word "retard," which, in and of itself, should have gotten Sapp fired anyway.

Where is it written that current NFL players have to show deference and respect to the immediate past or to players that went before? Where is it written that they have to know every statistic, every record, and care about any of that stuff? The coaches, owners, and general managers don't care about any of that stuff. The NFL is a business, and if you can't perform, no one cares if you hold the franchise record for catches. No one cares if you have been around for twelve years and have bled for the team. If you can't play, you're gone. Sentimentality has no place in the business of professional sports.

What respect for the past did Warren Sapp ever show? He played like he was getting paid and I watched him for years. I watched him showboat, dog it, and do whatever he wanted. I watched him, on live television, challenge an opposing team's head coach to a fight while walking off the field after he had delivered a vicious cheap shot on a player--remember that? Sure, he played hard. He played hurt. But his time playing is done. His personal life is a shambles, he's broke, and he's lucky to have a job.

Next time, ignore Warren Sapp. It saves time and effort. He has nothing to add to the game when his analysis is focused on calling an active player a "retard."
at September 24, 2012