They Will Cheat Again 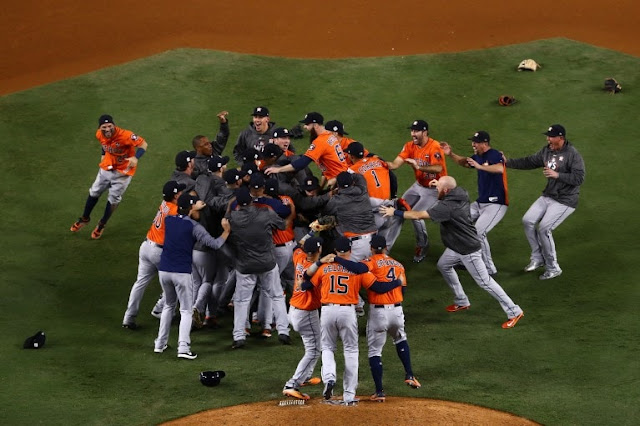 It's a shame to see Rob Manfred destroy the credibility of baseball and all in the name of keeping two big money franchises happy:


The stripping of victories and championships is a punishment used in college sports when teams are caught in cheating controversies, but the same will not happen in Major League Baseball.

MLB Commissioner Rob Manfred appeared on Fox Business on Wednesday and said the league will not strip the Houston Astros or Boston Red Sox of their World Series titles after sign-stealing scandals (h/t ESPN).

He said the league will honor the "long tradition in baseball of not trying to change what happened."

While they won't lose their 2017 crown, the Astros were certainly punished.

MLB stripped them of their first- and second-round picks in the 2020 and 2021 drafts, fined them the maximum $5 million and placed one-year suspensions on manager AJ Hinch and general manager Jeff Luhnow.

Cheating is as old as baseball, and so are issuing severe repercussions for said cheating. They go hand in hand. You bet on baseball, you throw a game, you get caught, you're done. You cheat and you get caught, you should--and the operating word here is should--forfeit your victory or title. And while we like to think of baseball as an exercise in using every available option to get an advantage against an opponent, we rely on a loose concept called "fairness" to regulate the game.
Manfred should think about the franchises that were cheated. Instead, he worships at the altar of the Red Sox. The devil with him, he's supposed to be impartial.
Baseball has been tinkering with its own rules for the last few years because interest in the game is waning. However, taking a little longer to throw a pitch was one of the relative handful of options that would allow a player to cheat while still keeping the game fair. That's what is being ignored here. Teams started stealing signs almost as soon as the players began using them. What wasn't fair about the whole deal was that they were not relying on the skill of the players on the field--like a runner on second base--but on the team's employees and on cameras. That rendered everything unfair.
When a player on the field or a coach steals a sign--that's fair. Baseball has long accepted that.
When some dudes scattered throughout the stadium are using spy camera and trash cans to signal hitters, that's unfair.
You won fairly by stealing a sign, fairly? Congratulations. That's baseball.
You won in an unfair manner? Too bad, you forfeit your victory.
Really, it's not that difficult. The overall problem hasn't been solved. The punishment did not fit the crime, and franchises will find a way to utilize their facilities in order to cheat (I'm thinking of how the Minnesota Twins used to turn on the fans in the outfield when opposing teams were up to bat!) If you don't take away their ill-gotten gains, they're going to keep doing it.
at January 22, 2020