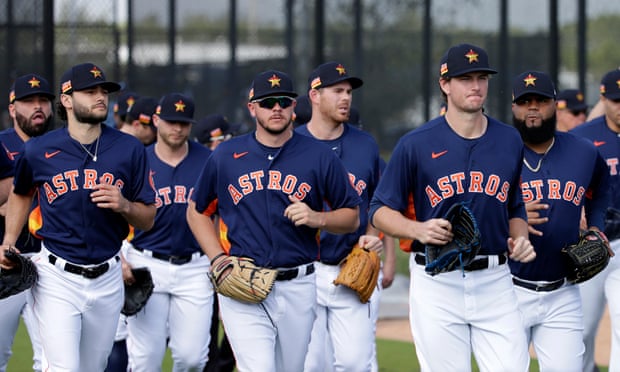 If there's one lesson to be learned from this debacle, it is that Major League Baseball has the wrong person in charge:


The Houston Astros have been punished, but has justice truly been served? That’s the big question hovering around Major League Baseball as commissioner Rob Manfred makes a futile attempt to move on from one of the biggest scandals in league history. Soon, Astros hitters, many of whom were part of that now-dubious 2017 World Series win, will face live pitching for the first time since the league handed down its judgment against the team’s sign-stealing scheme.

I don't know if firing Manfred would fix baseball's inability to properly punish franchises that have cheated because I don't think anyone is really being honest here. Stealing signs and using your stadium's structural advantages has been a part of baseball forever. Yes, using buzzers is crossing one of those phantom red lines that probably exists between the ears of purists but so what?

Banging trash cans is very 19th Century if you want to get right down to it, so how do we find a way out of this horror show? A lot of players who feel like they were cheated out of hits and strikes and playoff wins are screaming for blood in the most polite ways possible.

Honestly, in the first month of this season, I would not be surprised if each and every Astros batter ends up getting plunked in the ass more than once. And maybe they should. But if you throw at everyone who cheats, you're going to have to throw at everyone every day.