This is Not Justice 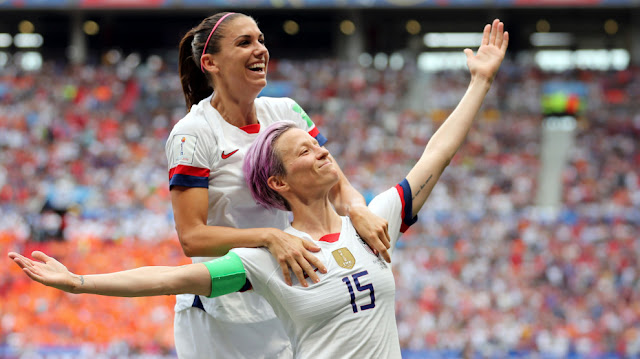 The U.S. Women's Soccer team is a proven winner. This team represents the best traditions of competitiveness and dedication. Every American should be proud of what they have accomplished and they deserve equal pay.

They do not deserve to be on the receiving end of this decision:


The United States women's football team's bid for equal pay has been dismissed by a court, with the judge rejecting the players' claims they were underpaid compared to the men.

The lawsuit was filed by 28 women's national team players last year against the US Soccer Federation (USSF).

They had been seeking $66m (£52.8m) in damages under the Equal Pay Act.
Molly Levinson, the players' spokeswoman, said that they planned to appeal against the decision.

"We are shocked and disappointed," said Levinson. "We will not give up our hard work for equal pay.

"We are confident in our case and steadfast in our commitment to ensuring that girls and women who play this sport will not be valued as lesser just because of their gender."

Joe Biden, the presumptive Democratic nominee for US president in this year's election, told the team to not "give up this fight", adding: "This is not over yet.
"To US Soccer: equal pay, now. Or else when I'm president, you can go elsewhere for World Cup funding."

For everyone who believes, as I do, that the women should actually be paid more than the men given everything they've won, please note that eventually they will get paid equal to the men. They will win this right and they will be made whole. Addressing this ridiculous oversight is just going to take a little more time.

Anyway, this is what Megan Rapinoe had to say today:


"They're the only federation that we can have," Rapinoe said. "We're the only team that they can have. We're going to be tied together forever. So I'm always hopeful that there's a way that we can work through this. But I really do believe that there needs to be a major paradigm shift in in how they think about the women's team."

She continued: "But I think in order to honestly have the paradigm shift that we need, there needs to be a clearing of the house. I don't think that you can have all, you know, a lot of the same people that have overseen a lot of these decisions and been there for a long time. You know, unless they all sort of have a come to Jesus moment."

As part of their legal argument, the US Soccer Federation filed a brief claiming the women and men's teams have different jobs, in part because men are inherently faster and stronger, calling it "indisputable science."

"To signal to not only the boys that they are just innately better, but to the girls that they're innately lesser was just, I mean, it was stupid," Rapinoe said. "It just, I think, really showed how deep that sentiment goes that they were willing and comfortable to put that in a public briefing."